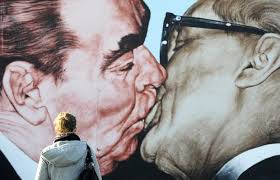 A panel on the Berlin Wall of Soviet leader Brezhnev kissing his East German counterpart, Honecker.

My first plan for Berlin was to see the remaining wall. There is about one mile of it left standing, and it is called The East Gallery because artists from around the world came to paint it in 2009. I understand the project was undertaken to remedy the deteriorated condition of the artwork/graffiti on the wall. It is an impressive sight. The wall is about 20 ft high, and each artist has used about a 10 ft length, sometimes more. The art is colourful and bold. Most images and text are a plea for peace.

There were a handful of tourists there, snapping photos, and it is a very low key environment. I expected there to be the usual collection of vendors harrassing the tourists, but there were none! On the other side of the wall is a river that divided east and west. The shores of the river were called “no man’s land” and it was heavily guarded by soldiers whose instructions were to shoot to kill. I understand that many thousands lost their lives trying to scale the wall. It was a sad walk along the west side as I imagined the difficult lives of those on the east side. A narrow swath of land made all the difference in the world to those trapped on the other side.

Getting to and from the wall was an adventure in itself. Those who know me know that I am useless at directions and maps, so using the subway was a challenge. On my way there, I got off at the wrong station and found myself in a major shopping plaza. Oh well, I guess I’ll go shopping for awhile.  🙂  The trip home from the wall was worse. I got on an express train by mistake and found myself travelling with a squash of commuters at the end of the day. There were no stops along the way. We passed forests, houses, churches, pastoral sights, greenhouses, and more forests for a very long time. I think we were close to Amsterdam by the time the train stopped. I made my way home, alone on the train back to Berlin. Good thing I wasn’t in a hurry.