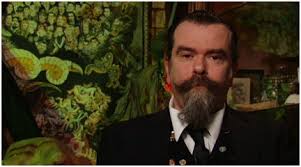 If you have read my previous blog, you will know that I am in Chicago, spending some time with Intuit: the Center for Intuitive and Outsider Art. Every year Intuit has a Visionary Ball – an art auction to raise funds for their not-for-profit organization. Artwork for auction is donated by generous members and supporting galleries. This year’s visionary award winner was Ann Nathan, who has been collecting outsider art even before it was recognized as art. She was commemorated for her leadership role in establishing Intuit and for increasing our knowledge and appreciation of self-taught and outsider artists.

Ann Nathan has always championed the work of Joe Coleman, a very well-known and controversial New York outsider artist. Coleman was at the Ball to give his thanks to Nathan for her unflagging support. I never thought I would have the opportunity to meet Coleman, but there he was, standing around with everyone else, shooting the breeze, getting his photo taken, and having a lot of fun. I don’t find it easy to engage in small-talk, especially with strangers, but I plucked up enough courage to introduce myself and ask him a few questions. He is an absolutely delightful person – warm, friendly, direct, and engaging.

Coleman spends a lot of time praising Nathan for her support. He says his work would have gone unrecognized had it not been for her vision and persistence. She introduced the art world to his work with an exhibit where nothing was for sale; she simply asked the public to stop and take note of his work. Like all outsider artists, Coleman has no interest in marketing or promoting his work. He only wants to make it. He is as absorbed in his work as every other artist I have met. Having achieved international recognition does not seem to have affected his work or style.

I asked Coleman about the big scandal at the New York Outsider Art Fair a few years ago. (See my earlier blog about this.) Coleman was “kicked out” of the Fair because was “too commercial.” In other words, he had gone from outsider to insider (that is, part of the commercial art world) in the committee’s view. Coleman smiled and rolled his eyes at this question. He thought it was funny and ironic that he was outside the outsiders now! We wondered where that put him. Is there a name for the outside-the-outsider category? I don’t think he has thought about it much since it happened. He doesn’t care what’s going on as long as he is able to create his art.

I also asked Coleman for his thoughts on the decision to include outsider artists in the Venice Biennale this year. He had some definite views on that. Coleman thinks that outsider art is the new and trendy thing in the art world. He views this action as just another move for the commercial world to cash in on the next trend. He might be right.

He also wished me luck in introducing the art world to Canadian outsider art. It is nice to have his good wishes.