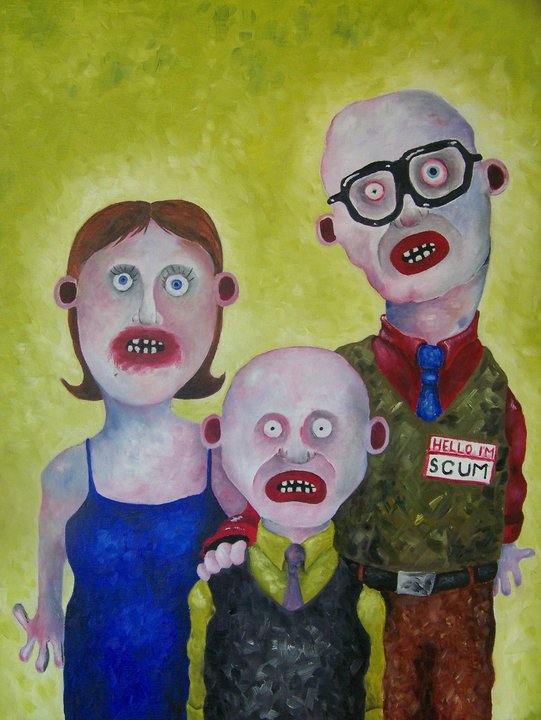 This is a continuation of my interview with artist Leigh Cooney.

Question: Who decided to label your work as “outsider”? Tell me about when and why you changed your label from outside to pop-folk.

Answer: Well this is a somewhat tricky question. In all honesty I can’t remember exactly when I got stuck with the Outsider label, but it’s something I’ve never shied away from… until recently. Originally what happened was this:

I started painting the second time around intending to scribble and scrawl and do everything in my power to fight the urge to focus on form. I wanted to get away from my inherent desire to paint like the masters. Attempting and failing repeatedly to accomplish something I simply couldn’t do was becoming disheartening. Of course even then I knew it was out of the question as I had never been to art school, and I had only attempted three or four paintings at that point. But patience has never been my forte. I simply wanted painting to be fun again, and originally I was inspired by artists like Basquiat, who seemed to me to embody exactly the freedom I was hoping to achieve. Of course what I’ve realized over the years is that Basquiat was actually very much in control, much the same way as Jackson Pollock was, despite how it may appear to the uninitiated.

So early on when I still considered painting to be a hobby, I started to post my paintings to certain Social Networking sites under the “Self-Taught art” groups. To my great surprise I got some very interesting feedback, and after certain comparisons started coming in, I began researching self-taught art. Naturally this search led me to discover the world of “outsider art” with which I became enamoured for the next couple years. Even in my ignorance of, and general disdain for art labelling, I understood even from the beginning that there was some controversy between the stringent European definition of Outsider or Art Brut, and the more encompassing North American definition, but I didn’t consider myself a purist, a critic, or an art historian, I just wanted to paint, and I had finally found what I considered to be a group of people who (whether it was deliberate or not) eschewed traditional guidelines to what made an aesthetically pleasing painting. There is a lot of what you might call “free-form” abstract style work in the world of Outsider art, but I was the most entranced by the figurative work of Southern artists, especially one piece in particular called “Remembering Rodney King” by Gerald “X” Thornton. Figurative paintings like these reminded me of another big inspiration of mine, which is certain Medieval and early Renaissance paintings, by which I mean, artwork wherein the spirit of the work seems to supersede the form. I was moved more by these paintings that were (to borrow a definition) in the naive style, in which traditional rules of proportion, perspective, and light source, are not employed.

So since I was self-taught, fairly oblivious to the art world, and painting in a relatively “naïve” style people just started to naturally associate my work with the Outsiders. Eventually I started to be contacted by collectors of Outsider art and small U.S. Outsider galleries that dealt with self-taught artists. I was never 100% okay with the terminology as some small part of me did feel like it confused matters to group all self-taught artists under the Outsider umbrella, when so many of us are clearly inspired by, if not a part of (to some degree or another) the mainstream art world. So therefore the purity which is limited to only the most isolated outsider artist is missing, and that is such a vital component of what makes outsider art unique.

So after giving it some thought over these past years, and after having argued countless times with people about the definition of Outsider art, and my place within it, I came to this conclusion: Although in general I find the labelling of groups of artists (especially without their consent) to be extremely arbitrary, I concede that the definition of outsider art should be reserved for that tiny percentage of artists that for one reason or another are completely indifferent and/or completely unaware of the ebb and flow of the art world. So I can only conclude that I am a purist when it comes to the definition of Outsider art… with a slight variance. Firstly, I don’t believe that Outsider terminology should be relegated to artists creating from within psychiatric hospitals, because there are some artists (I’m thinking specifically of Henry Darger or Raymond Thundersky) who lived relatively normal lives but were without a doubt “Outsider” artists by the otherwise strictest sense of the word.

Secondly, I don’t believe there is any harm in having a number of related terminologies for other types of self-taught art associated with the term “Outsider” including my own “Neo-Folk” and “Pop-Folk” terms. American Galleries, and global collectors that deal in outsider art have been very good to me, and despite the fact that my work is less and less of the naïve persuasion, I still live, work, create, and associate with only the fringes of the art world. Yes, I have a very rudimentary understanding of art history as well some contemporary artists that I find interesting, but I have never taken a course in art, nor have I ever researched how to paint. I simply paint as a way to deal with, and reflect the world around me.

Over the past four years I have given up trying to fight with myself over my inherent need to focus on structure and I’ve slowly become more form oriented as I find not only am I happier with the results of this work, but the trance like focus it takes to create it, frees me for a few moments from the foot tapping, jaw clenching, mind racing, distress of my ADHD. So it serves as a form of therapy, and that’s okay. Question: How has the public responded to your current work? Has the public’s opinion caused you to change your style in any way?

Answer: Over the four years I’ve been painting my style has changed at an exponential pace. Therefore it is inevitable that I will alienate hundreds of fans who were interested in my earlier more naive work in any given year, while simultaneously making hundreds of new fans. That is only the natural progression that any artist.  I genuinely feel sorry for the artists I see every day who are creating more and more mediocre work as they desperately cling to past successes to continue making money. To me, that is the day I stop painting, for I will no longer be serving any purpose to which I would want my art aligned.

Question: Do you paint every day? Could you ever decide to stop painting and do something else? How essential is painting to your well-being?

Answer: I do paint every day, unless I’m away from my studio for whatever reason in which case no painting gets done. I’ve tried to paint outside the studio, but I’ve found that I can’t deal well with distractions and I just get frustrated. As I mentioned, the actual act of painting is very therapeutic for me, but as well as that the lifestyle of an artist is one of the only jobs I could ever picture myself having. I don’t deal well with the pressures of people in groups, and due to my
ADHD I have trouble communicating in conversations where I have to organize my words and thoughts into coherent sentences in a timely manner. To exacerbate this I have fairly low self-esteem and I’m a little paranoid about people’s intentions. So I prefer wherever possible to communicate either through my painting, or in writing (like in this interview for example) where I can pause and reflect on what I’m trying to say and type at the speed at which my thoughts make themselves clear, NOT at the speed at which a listener might WISH for me to deliver the message. A paragraph that you read here may have taken me ten minutes of mental wrestling and anguish to get down on paper, but the end result is what matters and we both end up happy. Well I do anyway, the reader ends up with pages upon pages of my blathering… but can you imagine that in person at a quarter of the speed and completely out of order? Anyway, I guess what I’m trying to say is that I don’t always feel comfortable in the world outside my home and studio, and I am perfectly content with not leaving the house for days on end. I was in the workforce for 11 years, and in that time I ran the gamut of awful soul-destroying jobs, from restaurants to recycling plants, and I’ve never been as happy as I am now. I don’t believe in heaven so I believe this is all we get, and I’ll be damned if I’m not going to enjoy every minute of it.

Question: When you get ready to start a new painting, do you have an idea of what you want to paint, or do you experiment until the painting reveals itself.

Answer: I always have a fairly good idea of what I want to paint before I begin, but details therein can be pretty vague, so although I don’t make preliminary sketches before I start to paint (I have no patience for that) I do use a pencil to sketch a quick outline of the intended painting on to the canvas  first. So when I start sketching these details the painting can sometimes take on a slightly different direction, but it is unusual (but not unheard of) for  the painting to take on a life of its own.