The one outsider art gallery that I found in Berlin is called Galerie Art Cru.  I stumbled into the gallery after a seemingly hopeless search (I am always lost) through the Oranienburger district of Berlin. I walked in and announced to two people, “I finally found you!”. Those two people turned out to be the gallery director, Alexandra von Gersdorff-Bultmann, and her son Kolya – more members of my tribe. As you other lovers of outsider art already know, any mention of your passion will normally be met with a bored look, bordering on derision. But, I promise, when you find other members of your tribe, you will intuitively know that you “belong” somewhere.

The works of Josef Hofer (Pepi) are currently on exhibit and Alexandra took time to introduce me to his work. Hofer, now in his sixties, was born deaf and mute. He lives in a care home in Austria. He attended a basket making workshop for many years before joining an art group in 1997. Since then he has poured all his energy into drawing and painting. He draws all day, every day, to the extent that it is difficult to get him to take a break.

Pepi grew up on a farm. His first pictures were of farm tools and machinery, like tractors and pitchforks, drawn separately across the paper before him. Gradually, his work became more complex, with the drawings of a person filling the entire page. He would work as if he were dressing the person – first the body, then layers of clothing. One day Pepi was given a full-length mirror. What seems such an ordinary event to us was, in fact, a revelation to him. Having only seen his reflection in a small mirror until then, he was suddenly confronted with his entire self. 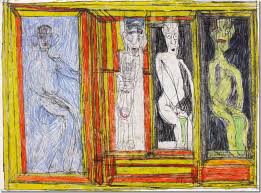 The exhibit is titled “Josef Hofer un der Spiegel” (Josef Hofer in the Mirror) and that is a perfect description of the collection. Josef draws figures framed by coloured lines (perhaps an expression of the basketry that he made). Josef’s exploration of his own nude body is an expression of discovering his own sexuality. He draws himself standing naked before a mirror, posed in various positions. His genitals sometimes feature in the drawing, as much of a remarkable discovery as everything else in his new world.

You either delight in Hofer’s work as an expression of self-discovery, or dislike them for their crudity. But no one expects (or hopes) to find Romantic Monet-like impressions in outsider art, do they?

Hofer has made a spectacular entrance into the world of outsider art. His work is now part of the Collection de l’Art Brut in Lausanne. Galleries in New York and Paris also show his work.