I have seen a lot of things in the outsider art world. I like some things; I don’t like others. But some works are mind-blowing and beautiful. Such are the creations of Emery Blagdon’s healing machines, on exhibit at the Kohler Arts Center.

Emery Blagdon (1907-1986) grew up in Nebraska. He inherited an uncle’s farm in 1955 and set about to harness the earth’s energies. Both of his parents had died from cancer and Blagdon hoped he might discover how to cure pain and illness. He began building healing machines in the barn, using scraps of wire, metal, beads, foil, vial of dirt, and mirrors. He worked continuously on this project for the next 30 years.

The healing machines were later installed in an adjoining shed that could house the entire machine. (See photo below.) He invited people in to receive the healing powers of his creation.

In 1975, Blagdon went to a pharmacy in search of “elements” to add to his machine. Pharmacist, Dan Dryden, was curious about Blagdon’s project and went out to the farm to see it himself. He (obviously) was astonished, and followed Blagdon’s progress for the rest of his life. Dryden moved away, but 11 years later on a return trip to Nebraska, he discovered that Blagdon has recently died. (Sadly, he died of cancer.) The farm and the healing machine were up for auction. To keep the entire work intact, Dryden and a friend purchased it. Parts of it were occasionally exhibited nationally and internationally, but the bulk of it was stored for 18 years.  In 2004, the Kohler Foundation took over the entire masterpiece and it is now part of its permanent collection.

It is hard to describe what it’s like to walk through a room of Blagdon’s creations. The magnitude of the project is awe-inspiring. The intricacy and shimmer of the hanging pieces are as beautiful as chandeliers. The room is quiet as visitors gaze at the magical display, swaying ever-so-slightly, as someone walks by. It feels like a sacred place. 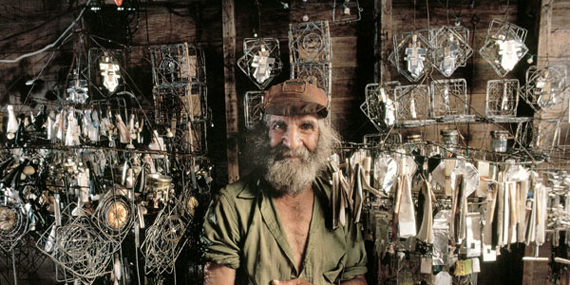 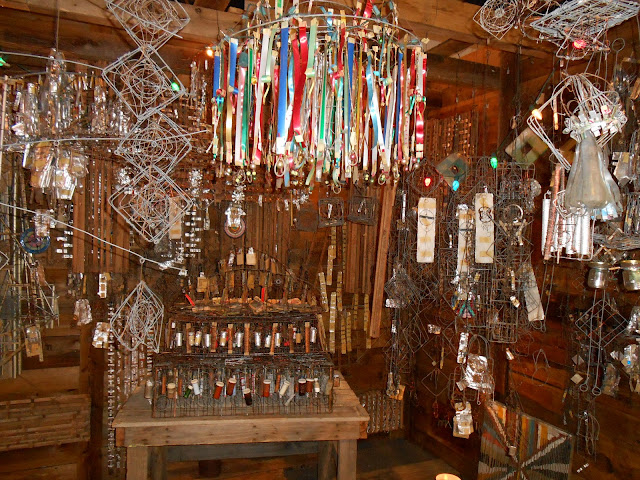