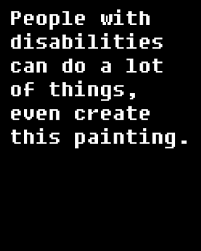 The long, long delay in postings is the result of getting my getting acclimatized to returning to university as a (very) mature graduate student. Yup, it’s true. My thesis, of course, will focus on Canadian outsider art.

My research will document what we know (not much) and don’t know (lots) about outsider art in Canada. My first line of inquiry is to define what outsider art means to Canadian art professionals. I have a feeling that this one question could take years to answer, but I am starting by looking at art workshops established by public organizations concerned with mental health issues. This is my first inquiry because in parts of Europe (like Germany, Switzerland and Austria) the definition of outsider art is still rooted in the world of mental health.

When I was in Berlin, I learned that Gallery Art Cru exhibits artwork created in studios specifically established for people with mental disabilities. In discussing this with gallery director Alexandra von Gersdorff-Bultmann, I discovered there was a  huge difference of opinion between North America and parts of Europe as to which artists are “in” and which are “out”. As we already know, the definition of outsider art in the USA includes just about everybody without artistic training who picks up a paintbrush, felt pen, or pencil and decides to create something. (OK – I exaggerate a bit.) But, really,
the genre is wide open, as you would expect in a country like the USA. The Germans were puzzled about how North Americans would work with such a vague and all-encompassing definition of outsider art. Good point. Personally, I think outsider art is defined more by its spirit than its roots, but I may be way off on that point.

My first step was to find out if Canada has open art studios and indeed we do. I had no idea. As far as I can tell, they work pretty much the same as those in Europe. Studios are open to just about anyone who has an interest in exploring art – those without a home, those struggling with mental or physical health issues, and so on. As in Europe, the studios are staffed by people who give some guidance on the use of art materials, but do not provide art lessons. I had the opportunity to attend an event sponsored by the Coast Mental Health Association. I met mentors and participants and got the same answer from all of them:

It is the creation of the artwork that provides the therapy, not the interpretation of it. It is not art therapy. It is art as therapy.